Judging from my casual conversations with people, they’re most likely to have read works such as William Manchester’s egregious A World Lit Only By Fire: The Medieval Mind and the Renaissance (1992), which was a New York Times bestseller and an unabashedly shoddy hatchet job on the medieval world, or Barbara Tuchman’s A Distant Mirror: The Calamitous 14th Century (1978), which spins a yarn good enough to win a U.S. National Book Award and does a better job with the sources than does Manchester, but whose arguments were dated even when it was first published. (Let’s not even get started on the person who once told me, in all seriousness, that they’d learned a great deal about medieval Italy from reading The Da Vinci Code. I still get the night sweats thinking about it.)

It’s much easier, however, to push good books on people than to sneer at what they have already read in good faith. All the titles listed here are in English, and should be accessible to the interested general reader, or academic non-specialist. I’ve also tried to only include works which aren’t too expensive (as far as medieval history books go), or which should be available cheaply secondhand. 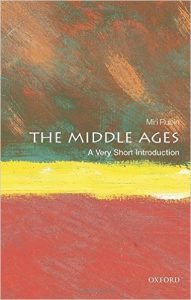 This little paperback does exactly what it promises on the cover: provides a very short introduction to the Middle Ages. In just 120 pages, Miri Rubin covers the ways in which medieval Europeans thought society should work and what salvation would look like, how they treated minorities and what points of connection we can see between the Middle Ages and the modern world. This is a straightforward refutation of the idea that the Middle Ages were a benighted and backwards time. 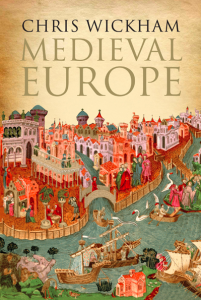 If you’re looking for a slightly more extensive introduction than Rubin’s Very Short Introduction, Chris Wickham’s Medieval Europe is probably the most up-to-date broad introduction available. Wickham covers the broad sweep of the thousand years between the end of the Roman Empire in the West to the Reformation, taking in some of the key social, economic, and political factors that shaped medieval Europe. Byzantium, the Islamic world, and Eastern Europe all feature—essential areas to consider, yet ones which are often omitted in standard surveys. 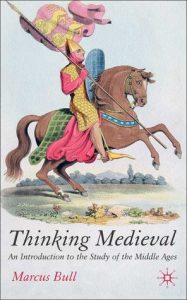 Marcus Bull. Thinking Medieval: An Introduction to the Study of the Middle Ages (2005).

If you want to step back and consider why we think about the Middle Ages in the ways that we do, pick up Marcus Bull’s Thinking Medieval. It’s compact but wide-ranging, looking at the stereotypes and representations of the Middle Ages in film, television, and the press—from Ivanhoe to A Connecticut Yankee in King Arthur’s Court and Pulp Fiction—and exploring why they are so persistent. Though written with the college classroom in mind, I think it’s also accessible to the general reader with an interest in understanding why the remote past matters. 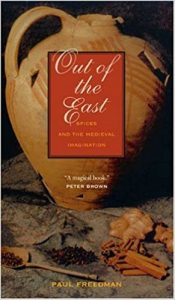 Paul Freedman. Out of the East: Spices and the Medieval Imagination (2008).

There’s a popular misconception that before Columbus’ sailed west across the Atlantic, medieval Europe was cut off from the rest of the world. Yet in Out of the East, Paul Freedman explores how trade—in particular the spice trade—had long linked Europe with parts of the world far distant from it. Traders were drawn east in search of pepper, cinnamon, cardamom, and other culinary and medicinal luxuries—and medieval Europeans enjoyed heavily spiced food that often resembled what we’d think of as quintessentially Asian or Middle Eastern food today. 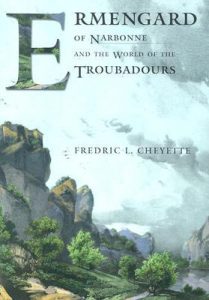 Fredric L. Cheyette, Ermengard of Narbonne and the World of the Troubadours.

In the late twelfth century, a woman named Ermengard, viscountess of Narbonne ruled across a large swathe of what is now southern France. Fredric Cheyette sets out to rescue her from the historical shadows. This is a hefty book, but one which provides some fascinating insight into the political and social contexts of this period—what it meant for a woman to be the lord of an important port city in a region home to one of the Middle Ages’ most famous heresies. 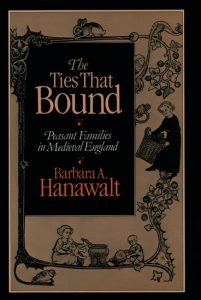 How did peasants in medieval England—the vast majority of the population—care for their children and their elderly? What games did they play? What did their homes look like? In The Ties that Bound, Barbara Hanawalt made pioneering use of late medieval coroners’ rolls to uncover details of the daily lives of peasants in fourteenth- and fifteenth-century England—and to show people who were as distinct and complex as anyone nowadays.

The Medieval and the Modern 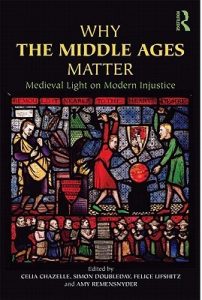 This thought-provoking collection of essays sets out to prove the assertion in its title. The various essays—on topics as diverse as healthcare, crime and punishment, and clerical sexual scandals—argue that while the Middle Ages may not provide neat solutions to modern social problems, then they do at least offer us new ways of approaching them. After all, “medieval” is not, and should not be used as, a simple synonym for “barbaric”, any more than “modern” is a synonym for “progress.” 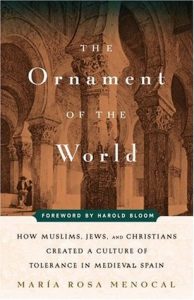 María Rosa Menocal. The Ornament of the World: How Muslims, Jews, and Christians Created a Culture of Tolerance in Medieval Spain (2002).

The “clash of civilisations” narrative—of an irreparable, binary conflict between the Christian West and the Muslim World—is used by many to explain contemporary political conflicts. Yet religious polarisation is hardly inevitable, and in The Ornament of the World, María Rosa Menocal explores the diverse and vibrant culture created by Muslims, Jews, and Christians in medieval Iberia. This multi-cultural society was one of the most advanced in medieval Europe. Menocal’s recreation of the glories of al-Andalus is perhaps at times an overly rosy one, but this is still a useful introduction to a period that’s still too-little known.

Patrick Geary. The Myth of Nations: The Medieval Origins of Europe (2003).

Nationalism is undergoing a resurgence in Western politics—Brexit and the election of Donald Trump being the two most prominent examples. Much of these ideologies are predicated on certain views of medieval history, but here Patrick Geary argues that ethno-nationalism has more to do with myth than with history—that its rallying cries date back to the nineteenth century, not to the Middle Ages. Geary packs a lot of argument into a relatively brief space, and even if you don’t agree with all of his conclusions, The Myth of Nations is sure to spark much further reflection.

That’s nine great books to start with, but there are lots more out there. If there are other books about medieval history that you’d particularly recommend to a beginning reader (or really wish that people would avoid), feel free to leave a comment below!