For most people, medieval nuns are shadowy figures, confined against their will in cloisters by overbearing families. But in recent decades, historians have undertaken a lot of archival research which shows that life for Catholic nuns in medieval Europe was a lot more complex, and a lot more involved with the secular world, than we once thought. The books in this list are a beginners guide for those who’d like to know more about the lives of these women (who are sometimes termed “female religious”—when used as a noun, “religious” refers to someone who is bound by monastic vows).

All the titles listed here are in English, and should be accessible to the interested general reader, or academic non-specialist. I’ve also tried to only include works which aren’t too expensive (as far as medieval history books go), or which should be available cheaply secondhand. Dipping into these books shows how diverse and dynamic the lives of religious women could be in the Middle Ages. 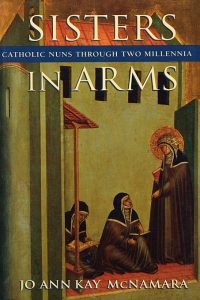 This thick volume (more than 700 pages) covers the history of Catholic nuns around the world from the earliest days of the church right through to the twentieth century. For the breadth of its coverage and for accessibility of language, it’s still unmatched for the general reader looking for an introduction to the history of female religious. That said, Sisters in Arms is now showing its age a little in terms of its analysis and conclusions. Don’t treat it as definitive, but use it as a jumping-off point in terms of over-all chronology and an introduction to some of the key figures in the history of female monasticism. 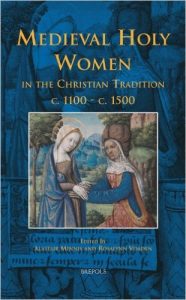 I said I would try to include books that weren’t overly expensive; sadly, this excellent (and hefty) collection of essays is published by Brepols which means that it’s almost certain to be unaffordable if you’re not a university library. However, Medieval Holy Women’s various entries provide an unmatched survey of the roles and interests of holy women (nuns and otherwise) across western Europe in the High and Late Middle Ages. Both the essays and their accompanying bibliographies will orient the reader towards the best in recent work on individual women and regional trends. 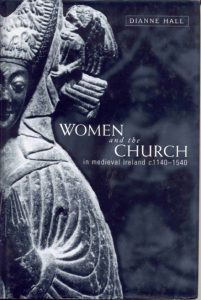 This book is a rare bird indeed: a comprehensive regional study of medieval women’s monasticism that’s affordable, reliable, and accessible to the general reader. Dianne Hall pulled together the scant documentary sources about female religious in medieval Ireland and complemented them with archaeological and art historical evidence to produce the first full-length study of the topic. Hall is particularly strong in demonstrating the links that existed between nuns and their surrounding lay communities, and if you’d like to start with a study that’s more focused than wide-ranging, I’d recommend this one. 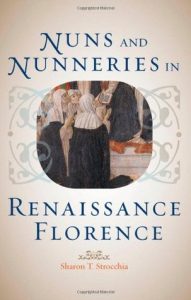 This is the first proper monograph to explore the lives of women in Florentine convents during the fourteenth and fifteenth centuries. Strocchia makes impressive use of the city’s abundant archives to show that in the period between the Black Death and the late fifteenth century, communities of religious women went from being relatively unimportant to being deeply embedded in the social, political, and economic life of the city. Through their involvement with the luxury textile industry in particular, the women made their mark on Florence’s economy and helped shape the city’s civic development. 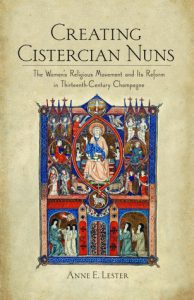 Lester takes as her case study female religious in the Champagne region during the thirteenth century. Her focus on what historians call “documents of practice” (in other words, texts that tell us about what actually happened, as opposed to say a law code which tells us what should happen) allows her to challenge the standard narrative of the history of Cistercian nuns. If you want to explore the fluidity of women’s affiliation with religious orders in the Middle Ages, and how church legislation could shape their way of life, this is a book well worth checking out. 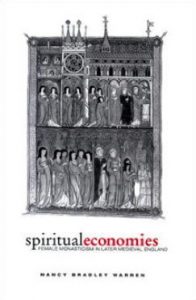 Think that medieval nuns could entirely dismiss economic concerns? Nancy Bradley Warren encourages you to think again in this study of the house of Dominican women in Dartford. She draws on court records, financial accounts, and devotional treatises, among other sources, to bring to life a vibrant and wealthy community which was as much a part of the material economy as it was the spiritual one. 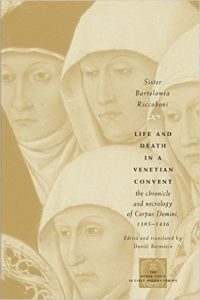 Bartolomea Riccoboni. Life and Death in a Venetian Convent: The Chronicle and Necrology of Corpus Domini, 1395-1436 (2000).

This account of convent life was written by a Venetian nun who lived around the turn of the fifteenth century. Sister Bartolomea Riccoboni’s chronicle of the community’s foundation, coupled with short biographies about some of the other nuns, provide a wonderful insight into both daily life in a convent and how a group of female religious could become involved with ecclesiastical and secular politics. Daniel Bornstein’s translation is particularly clear. 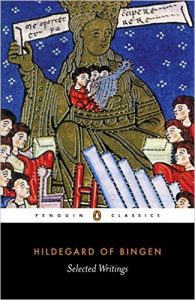 Hildegard of Bingen is one of the most engaging characters of the Middle Ages: a Benedictine nun, she was a prolific and original writer with a broad array of interests and a personality that comes through loud and clear in her writing. Although she’s never officially been canonised, in 2012 she was proclaimed a Doctor of the Church. This edition provides selections from her writings—letters, theological works, and medical treatises—accompanied by useful explanatory material about her life and times. 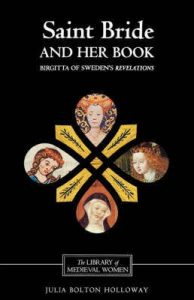 Birgitta (or Bridget) of Sweden was a fourteenth-century mother, mystic, and founder of the Bridgettine Order of nuns and monks. This book gives a translation of Birgitta’s medieval vita, or biography, together with excerpts from her great theological work, the Revelations. An accompanying essay shows how Birgitta was politically active, involved in attempts to end the Hundred Years’ War and the Schism, and how she influenced female mystics in the later Middle Ages.

That’s nine great books to start with, but there are lots more out there. If there are other books about the history of medieval nuns that you’d particularly recommend to a beginning reader, feel free to leave a comment below!