We’re only a couple of months into 2014 and it’s already been a tough year for archaeological sites in Ireland. First we had the loss of most of Dúnbeg, a cliff-top Iron Age fort in Co. Kerry [Irish Times, Irish Independent], and now an eight-hundred-year-old Anglo-Norman castle in Laois has been demolished. I grew up only a couple of miles away from Coolbanagher Castle, and wrote my undergraduate thesis on nearby Dunamase Castle—Coolbanagher and Dunamase were likely part of the one network of defensive fortifications—so this is doubly shocking and disheartening to me.

As you can see from the picture above (photo from National Monuments Service), Coolbanagher was in a ruinous condition and had been for some time—the eighteenth century seems to have been the last phase of its inhabitation per the archaeological evidence. The most recent bout of severe weather brought down part of the castle’s south wall. News reports are still a little unclear as to what happened—according to a report in the Irish Independent, the structure was demolished following an order from Laois County Council; however, the National Monuments Service has issued a statement saying that they only “granted consent for the removal of such parts of the structure as was identified as being strictly necessary to comply with specific directions from Laois County Council under dangerous buildings legislation or by a qualified engineer as being immediately and urgently necessary on the grounds of protecting public safety.”

Right now, I cannot understand how reducing the entire structure to a mound of rubble in a matter of days was necessary to protect public safety.

I’ve seen some comments on line saying that Coolbanagher was simply a rather run-of-the-mill late medieval tower house and as such is no great loss. This seems to me quite wrong-headed. Even if we disregard the fact that Coolbanagher was likely an early example of an Anglo-Irish stone castle, if we preserve only the extraordinary, the exceptional, the monumental, we end up losing much of our heritage and are left with a skewed historical narrative which concentrates on the elite.

There’s also the fact that no archaeological site exists in isolation. As you can see from the map above, Coolbanagher Castle (marked in orange) was located just to the east of Shaen Castle (blue) and not far to the northwest of the great stronghold of Dunamase (pink). Coolbanagher existed in, and can only be properly understood in, relation to these and other defensive sites in Laois. Each time we lose a piece of the jigsaw puzzle, however small, we reduce our potential for understanding the medieval history of our county.

The collapse of Dúnbeag may have been unavoidable. The destruction of Coolbanagher Castle should not have been. 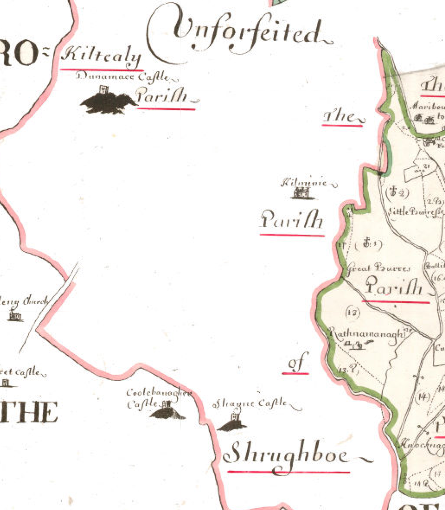 Mid-17th century map of area, taken from the Down Survey of Ireland. Dunamase is at the top of the image; Coolbanagher and Shaen are shown at the bottom.