Yesterday I attended the 14th Medieval Dublin Symposium—the first one I’ve been able to attend in a while, and indeed the first time I’ve set foot on Trinity’s campus in a little over two years, thanks to last summer’s trip to Africa. I think that’s the longest I’ve gone without at least walking through it since I was a junior freshman. (A terrifying length of time ago now!) There were lots of little changes that I noticed as I made my way across Front Square, some of which were even relevant to the day’s presentations.

I’ve written about the papers below, based on my notes and my imperfect memory, so please forgive any important omissions!

After some opening remarks by the symposium organiser Dr Sean Duffy, the first paper, entitled “The archaeology of the priory of All Hallows and Trinity College Dublin: recent discoveries at Front Square” was given by Linzi Simpson, an archaeologist who has worked on some of the most fascinating digs in medieval Dublin, including those at Temple Bar West, South Great George’s Street and Golden Lane.

This paper was, as the title indicates, on archaeological work undertaken at Trinity College. Archaeologists made good use of the opportunity afforded by the minor construction work I’d noted on my way in to the Arts Block—wheelchair accessible paths have been laid across the cobblestones—and Simpson’s team seem to have definitively located the site of the the 13th century priory which was at first incorporated into, and then subsumed beneath, the college. As you can tell from the image above, the priory’s remains are very close to the modern ground level. The red brick remains are certainly striking—it was interesting to imagine a Trinity College that looked much more like the Rubrics than the familiar, Georgian-style grey stone.

The second paper was entitled “Orator/spokesman/lawspeaker? The airlabraid of Dublin in the tenth century.” Denis Casey (Cambridge) looked at a reference to the otherwise unattested figure of the airlabraid in the accounts of three annals about a battle in 980. The word, translated literally from the Old Irish, means something like “one who speaks on behalf of another.” Casey examined three known Scandinavian institutions which may have been rough equivalents—the þulr or þyle, the lögmaðr, and the lögsögumaðr—and concluded that none of them seem to be a match. He suggested that the Dublin airlabraid may be a unique figure, the product of a hybridised, Hiberno-Norse legal sytem. Given the paucity of the evidence, however, this can only be a suggestion.

Caoimhe Whelan (TCD) presented the day’s third paper, “James Yonge and the writing of history in late medieval Dublin”. Her dissertation research focuses on Middle English writing in later medieval Ireland, including texts much like Dubliner James Yonge’s fifteenth century translation of the Gouernaunce of Prynces. While much of the text accords with what one would find in a continental Mirror of Princes, Yonge inserted episodes from Irish history into his translation—events which seem well-suited both to instruct and to praise his patron, James Butler the White Earl of Ormond. Whelan’s paper was a really fascinating example of how we can use literary sources to analyse the political tensions of a given time—especially given the length periods which Yonge spent imprisoned in Trim and Dublin Castles.

Lenore Fischer (Independent) then spoke on “How Dublin remembered the Battle of Clontarf,” in what was definitely one of the more spirited academic papers I’ve ever seen! We were treated to somewhat of a recreation of the Battle of Clontarf, before Fischer analysed various differing accounts of it to show that Dublin had a cultural identity and an awareness of its history which was quite different from that of the rest of Ireland. 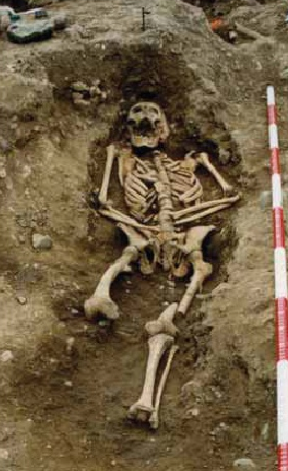 Our first paper after lunch was, of course, suitably gory and unsettling. Edmond O’Donovan spoke on “Battle-wounds, murder and death in early medieval Swords: evidence from archaeological excavations at Mount Gamble.” The site was uncovered during construction work to build an extension to the shopping centre at Swords. A previously unknown medieval cemetery, it contained at least 281 burials, with all the bodies interred between about 600 and 1150, for an average burial of 1 every 2.5 years, suggesting a stable local population of about 20 people.

It may not be readily visible in the picture to the left, but this unfortunate young man was decapitated (with enough force that part of his chin was also severed with the blow), stabbed several times in the back and neck, had defensive wounds to his arm and also had severe injuries to his legs. Some 11% of known male burials from the site showed evidence of weapons-related injuries, some quite frenzied. Most people, of course, didn’t suffer violent deaths, but many of them would have suffered painful and untimely ones. The average age at death was approximately 25, and there was a lot of evidence for scurvy and malnutrition. One of the most poignant images came from a grave in which three children were buried together—one about 11, a toddler, and an infant. All their skeletons showed signs of malnutrition. It was one of those moments which serves as a bleak reminder of the humanity of the people we study as medievalists—the kind of moments and perspectives which so rarely make it into the documentary record.

Eoin O’Flynn (TCD) followed with “The Dublin Vikings and the Clann Cholmáin kings of Southern Uí Néill.” He looked at the interactions between the Clann Cholmáin kings, whose chief complex was at Lough Ennell in the Midlands, and demonstrated that a series of them—Maelsechnaill I, Flann, Donncha and Maelsechnaill II—were successfully able to interact with, and exploit, the population of Dublin for their own benefit.

The third paper of the afternoon session was given by Andrew Woods (Cambridge) and was entitled “A screpul from every moneyer’: interpreting coin finds from early medieval Dublin.” Here I have to acknowledge a previous connection! Andy and I studied for our Master’s together at St Andrews. He looked at the evidence for coin usage from 10th and 12th century Dublin, and I think quite convincingly demonstrated that the mint at this time must have been located on Christchurch Place, just to the south of where the cathedral now stands. He also showed the exceptionality of Dublin in terms of coin usage at this time—while coin hoards found on the rest of the island showed that trade networks did exist between the city and elsewhere, only in Dublin did people seem to use coins on a regular basis.

The day’s final talk was by John Montague (Royal Irish Academy), called ““But what about the earlier city?” – John Rocque’s Exact Survey (1756) as a source for medieval Dublin.” Rocque’s map is of course well-known to anyone working on the history of medieval Dublin—its scale and thoroughness make it invaluable to researchers. However, the man himself is less well-known. I hadn’t known that the Dublin map was Rocque’s very first attempt at a map of this scale and complexity, or that he was principally an engraver, nor that his workshop was located on Batchelor’s Walk. Montague’s talk was an interesting look “behind the curtain”, so to speak. I only wish that things hadn’t run over, which meant there was no time to get into comparisons between Rocque’s work and previous maps of Dublin.