Image: A celebratory dance in the margins of “The Romance of Alexander”. Bodleian Library, MS 264, f.21v. [Source]

It’s my pleasure to host the 144th instalment of the History Carnival, and to dig into some of the best recent historical blogging. 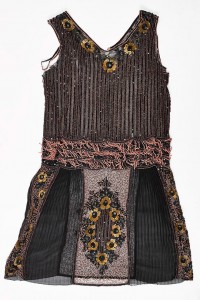 At the National Museums of Scotland blog, conservator Miriam McLeod shares the process of restoring a flapper dress from the Age of Jazz. It took 150 hours of painstaking work to get the dress (pictured right) ready for display. Erin Doane of the Chemung County Historical Society recounts the discovery of a cache of theatrical makeup which dates to around the same time as this dress.

Tim Abbott inaugurated his new blog about the material culture of late colonial America with a post on uncovering the story behind the stolen coat of an officer from New Jersey. Danielle Thom of the Victoria and Albert Museum looked at roughly the same time period, exploring how material objects can help reveal queer cultures in eighteenth-century Britain in “The Macaroni and his Ancestors.”

Some medieval bloggers were also exploring odd things to do with the body. On the University of Sheffield’s “History Matters” blog, Robyn Parker explores medieval stories about swallowing spiders—if you shuddered at the thoughts of that, rest assured that it’s a cultural aversion that’s of very long standing. Over at “Unusual Tales”, Rebecca Browett tells the tale of Foldbriht, a zombie monk from Anglo-Saxon England.

Meanwhile, Lori Jones, writing for the “Global Medieval Studies” blog, traced how a medieval manuscript image of leprosy, wrongly identified as showing victims of the Black Death, has spread online like… well, like the plague, I suppose. “Getting the Words Out (and Back In): What to do When a Plague Image is Not an Image of Plague.”

Kristan Tetens explores the Georgian penchant for stories set in magical, exotic places in her post, “Scheherazade on the English Stage: The Arabian Nights’ Entertainments and the Georgian Repertoire.” Hundreds of melodramas, operas, and pantomines were written in the eighteenth and nineteenth centuries based on the adventures of Sinbad, Aladdin, and Ali Baba.

In eighteenth- and ninteenth-century England, those who could afford it had access to what was then the cutting-edge of medical technology—even if the effectiveness of that technology was somewhat dubious. Katherine Allen looked at the kind of experience an elite visitor could expect at the spas of Bath during the Georgian period in her post, “Spa Culture, Recipes, and Eighteenth-Century Elite Healthcare.” At the “Panacea” blog, Samantha Sandassie traced the introduction of acupuncture to Victorian England in a two-part post. [Part 1] [Part 2] (The whole concept of galvano-acupuncture makes me shudder.)

Those who were poorer were often less fortunate when it came to access to medical care. Caroline Rance recounted the story of Maria Owen, “The Bogus Lady Doctor” of late Victorian Birmingham. None of her patients seem to have fared well. 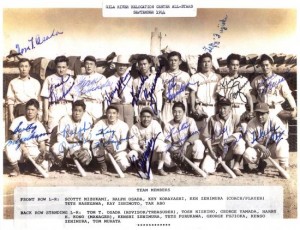 Hopping across the Atlantic we find Philip Byrd at the Smithsonian’s blog looking at “Baseball behind barbed wire“—how the game allowed Japanese-Americans interned during WWII to have some recreation and also to assert their identity as Americans. (Pictured left: the baseball team from the Gila River Relocation Camp)

Robert Whitaker looks at what he argues is perhaps the deepest and most durable connection between Britain and the United States: “The Secret Anglo-American Empire of Intelligence.” David Thackeray, Marc-William Palen, and Richard Toye teamed up to provide the useful post, “12 Digital Research Suggestions for Dissertations on the History of Modern Britain & the British Empire.” Elsewhere on the same blog, Marc-William Palen debunks the idea that protective tariffs, rather than slavery, were the cause of the U.S. Civil War.

… and Meeting the Public

Teaching and public engagement are both important aspects of the work of professional historians, and our final two posts grapple with these issues. In “Why Teaching the Constitution Matters“, Sean Robertson argues for the importance of teaching the U.S. constitution in a historical context in order to create a well-informed voting public. In “Wolf Hall and the historians: What can historical drama do?“, Carys Brown looks at the challenges of doing history in public.

And that’s it for the Carnival for another month! Keep an eye out over at George Campbell Gosling’s blog, which will host the next round on May 1.