Above: General Hospital’s Tower, as seen from the steps of the Old Capitol 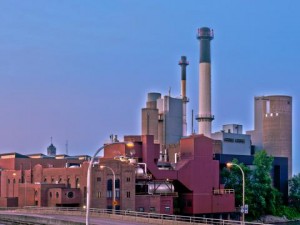 Four times a day, the University of Iowa campus resounds to the blast of its power plant’s steam whistle. Though it’s so loud that it’s audible from pretty much every part of downtown Iowa City, the whistle largely blends into the pattern of daily life here. Once you’ve lived in the area long enough, you don’t really notice the sound consciously anymore—just as most people probably walk past the power plant building itself (pictured left) without paying it much attention.

It’s a rather utilitarian building which hunkers down next to the river on the Burlington Street bridge. But it’s also one of the few Medieval Revival buildings on a campus which otherwise tends towards the Neoclassical or the modern in its construction. Ignore the chimneys and the other bulky structures to the right of the picture—focus on the original structure, the red-brick building closest to the bridge. It may not be obvious at first, but if you know what to look for you can see how the architects who designed it in the late 1920s drew on the architectural language of the Romanesque cathedral. You can see it in the narrow, round-topped windows and in the slightly projecting bays which are decorated with Lombard bands. 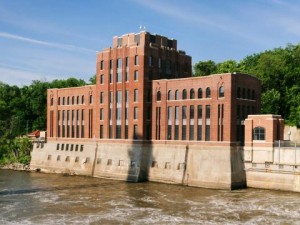 The Stanley Hydraulics Laboratory (pictured right) stands on the opposite river bank facing the Power Plant. Built in 1919, it’s also got those arched, Romanesque-style windows, and the long, narrow building, bisected by a slightly taller central tower, recalls a medieval cathedral and its transept. The steel-frame structure, however, allows the separation between the floors to be seen through the windows, letting into the building the kind of light of which architects of the Romanesque period could only have dreamed.

Continuing west up Grand Avenue from the Stanley Hydraulics Laboratory brings you to the Boyd Law Building. This rounded, postmodern structure owes little the medieval period. However, there is something of the Middle Ages tucked in next to the building’s main entrance: Auguste Rodin’s sculpture, “Jean de Fiennes.” 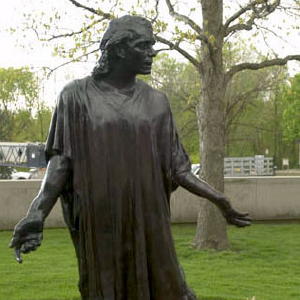 This bronze statue (pictured left) stands a little over life size. It’s one of six separately cast figures that form part of Rodin’s monumental work, “The Burghers of Calais”, which was completed in 1889. The artwork commemorates six citizens of the town, who volunteered to be executed in order to end the English siege of Calais during the Hundred Years’ War—Jean de Fiennes was the youngest of the six. Supposedly only the intercession of Philippa of Hainault, queen of Edward III of England, saved the men’s lives. Their willingness to sacrifice themselves is emblematic of the valorisation of civic duty which emerged in Western Europe during the Middle Ages, and makes this sculpture an understandable choice to associate with a law school.

A little to the northwest of the Law Building is the hospital complex, home to another medieval revival structure. The General Hospital’s Gothic tower, built in 1929, is the focal point of a building whose architecture was designed to recall the medieval monastic buildings which were the forerunners of modern hospitals. Archival photos show that the tower was designed to mimic the late fifteenth-century gate tower of Magdalen College, Oxford. While much of the lower part of the tower is now hidden from view, thanks to the accretion of later construction around its base, its sheer height, and its alignment with the Old Capitol, helps to make it an axial element of the university campus.

From the 1950s onwards, building design on campus took a decided turn for the contemporary, but even on this very modern campus, in the heart of the US Midwest, hints of the Middle Ages peep through.

* The title of this post is taken from that cinematic masterpiece, Bill & Ted’s Bogus Journey.