I headed away from my usual campus haunts today, across the river and up the hill to the Hardin Medical Library. Tucked into a corner of the library’s fourth floor is the John Martin Rare Book Room (pictured left), which holds the University’s collection of rare medical books, including some fifteenth and sixteenth century incunabula. The curators held an open house this evening, and I couldn’t pass up the chance to explore some of their collection.

While medical history isn’t my field, I find incunabula fascinating from the perspective of the history of the book. It’s not just the shift from handwriting to type, or from parchment to paper. Here you have reprints of texts that have often existed already for centuries in the manuscript tradition, sometimes still with hand-painted rubrication and illumination, sometimes reproducing the medieval system of scribal abbreviations. You can see the process of working out this new technology right there in front of you. 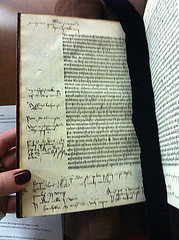 For example, this text (right) is Mondino dei Luzzi’s (d. 1326) Anatomia, in an edition likely printed in Leipzig in 1493. This is one of the first texts which teaches anatomy in a systematic manner, written around the time that the body also began to be dissected in an orderly fashion. (The frontispiece for this book even has a woodcut showing a dissection in process; the body being dissected looks remarkably sanguine about the fact that his intestines are on display.) The printers recreated the scribal abbreviations used in the original text, even though the work involved in creating all those type pieces for each individual symbol must have been painstaking. The whole volume is annotated in a late medieval or early modern hand—which I had to admit was quite impenetrable to me—and liberally sprinkled with some beautifully sketched manicules.

So far, so medieval, yet the economies of scale which printing introduced meant this edition was able to reach many more people than manuscripts of Anatomia ever did. I wonder if the wide margins were a feature deliberately designed by the printers to appeal to note-taking medical students? It’s certainly an easily portable size, and it’s easy to imagine someone taking this along with them for reference on the go. 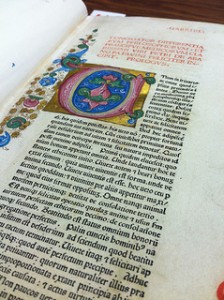 Some other highlights of the collection include a ca. 1470 edition of Jean Gerson’s (1363-1429) Tractatulus de cognicione casittis et pollucionibus diurnis, the first printed book to address sexual matters; Pietro d’Abano’s (1250-ca. 1315) Conciliator differentiarum philosophorum et medicorum in a beautifully illuminated edition of 1476 (see left); a massive three volume set of Avicenna’s (980-1037) Canon medicinae, which was printed in 1498 and is said to have been the first edition of Avicenna’s work printed in France; and an even larger copy of the Nuremberg Chronicle (1493).

I spent my walk home trying to think of ways to incorporate these holdings into the next class I teach—I think they’d appeal to a lot of undergrad students, particularly those from a STEM background. Even if they can’t read the texts themselves, there’s still a lot to be said for getting to experience the origins of your field through a physical object. And to be honest, thinking about lesson plans was a good distraction from the fact that I was trudging through the mother of all rainstorms which had not just turned my umbrella inside out, it snapped the handle in two. Midwestern weather is always an experience.