Even after a full night’s sleep and multiple cups of Barry’s Tea, I’m still not quite recovered from Outing Outsiders: Exclusion in Medieval and Early Modern Europe conference which took place this past Friday and Saturday. It was held at Trinity College Dublin, in the Long Room Hub, which is a pretty swank new research institute that was only a gleam in some planner’s eye when I was an undergrad there. The Hub was an excellent backdrop for some really great discussion.

The conference was led off by the early modernists. Raina Howe (NUI Galway) looked at representations of woodkernes, or sort of woods-dwelling light infantryman, who were a thorn in the side of the English right through into the seventeenth century. Inhabitants of wild spaces where wolves still roamed, they were regarded by some as quasi-human.

Stuart Morrison (University of Kent) turned to a study of metaphorical wolves in his paper, which examined representations of Catholics in the writings of Ephraim Paget, a seventeenth-century English Protestant preacher. Paget wrote sermons in which Catholics appear as “mystical wolves”, out to snatch innocent lambs from Christ’s flock—sermons which, I was intrigued to hear, were in at least once instance published by a woman!

Carla Lessing (NUI Galway) rounded out the session with a look at representations of English born in Ireland during the Tudor period—that is, those who are sometimes called the Old English or the “Middle Nation”, the descendants of settlers who came to Ireland from Wales, Normandy, and England after the Norman invasion of Ireland. Many of them having adopted Irish customs and dress, and remaining Catholic even as those who remained in England regarded them as degenerate, losing their civilised customs as a result of contact with the Irish—as one writer put it in 1586, because they are “inuironed and compassed with euill neighbours.” Charming! 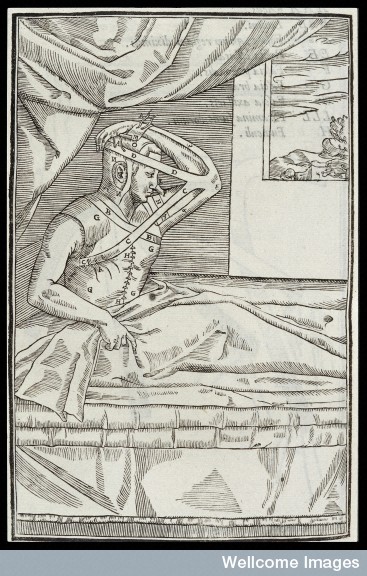 Patricia Skinner (Swansea University) gave a fascinating and wide-ranging keynote talk in “Putting on a Brave Face? The disfigured as outsiders in early medieval Europe.” She explored if acquired, as opposed to congenital, facial disfigurement marked people as outsiders in early medieval Europe, or if in an age before advanced medicine, such markers were commonplace enough as to be without stigma. Prof. Skinner urged us to step back from the modern assumption that facial disfigurement provokes an innate disgust. She used E.E. Jones’ theory of the six dimensions of stigma—concealability, course, disruptiveness, aesthetics, origin, peril—to examine some of the ways in which medieval people talked about various kinds of facial disfigurement. Her conclusion is that historians have perhaps been too quick to take stories about grotesque disfigurations at face value, and she argued that many accounts of torture and mutilation are horror stories, designed to be read metaphorically rather than literally.

Although as you can see on the right in this woodcute from Gaspare Tagliacozzi’s 16th-century De curtorum chirurgia, medieval and early modern Europeans were prepared to at least entertain the idea of some fairly radical techniques in facial plastic surgery. This gentleman has lost his nose, so Tagliacozzi proposed a technique in which he’d spend two months with part of his arm sutured to the remains of his nose in  primitive form of skin graft.

In the arrestingly titled “And ƿus bastard braunchis shulde be kutt fro ƿis tree:” A Lollard Conception of Social Reform”, Gregory Hulsman (TCD) offered a reassessment of aspects of Lollard historiography. Focusing mostly on the texts found in TCD MS 245, Hulsman argued that historians have over-emphasised the radical element in Lollard theology which sought to overturn the oratores, bellatores, laboratores model of medieval society—they were not monolithic in their thought and some of them could be quite conservative.

Tadhg Ó hAnnracháin (UCD) looked at a time and place about which I previously knew very little: the Balkans in the mid-seventeenth century. He detailed the tensions which existed between the Franciscans and the Jesuits in Bosnia, and how each group attempted to cast the others as outsiders as they competed for supremacy in the region.

Finally, we jumped back in time with Corinna Burrell (KCL) to look at the medieval romance Sir Orfeo, a medieval reworking of the classical tale of Orpheus and Eurydice. Burrell examined issues of material identity and metamorphosis in the text.

Emmett O’Byrne’s (CIT) talk centred on the career of Rory Oge O’More (pictured above in the conference’s promotional poster). As a Laois woman, I was of course guaranteed to find this an interesting topic, the O’Mores being at one point the Gaelic rulers of my home county and a family with a distinct knack for scuppering English attempts at imposing firmer control in the area.

Matthew Stevens (Swansea University) drew on social identity theory to examine the development of Welsh national identity in the Middle Ages. He argued that for ordinary medieval Welsh people, national identity was formed as a result of their legal categorisation by the English and Anglo-Normans. Previous identities had been more local or seigneurial, and so Welsh identity before the conquest was something malleable and negotiable.

Kenneth Austin (Bristol) argued for a reconsideration of the history of Jews and Judaism in Reformation Europe. Prof. Austin said that we need to move beyond seeing Martin Luther’s views of the Jews as characteristic of the sixteenth century. The Reformation was a period which brought humanist studies of Hebrew and Judaism into the academic mainstream, and not every Protestant thinker accepted the idea of the blood libel, for instance.

Jen Bartlett (York) is attached to the England’s Immigrants project. In her talk, “An Outsider on the Inside: Ralph Cavelario the Intellectual Immigrant”, she documented the career of a French Protestant scholar of Hebrew, whose personal beliefs prompted him to settle in Tudor England and who did not find as many barriers to acceptance by the English as perhaps one might expect.

Sarah Russell (University of Western Australia) rounded out the session with a really interesting look at how emotion was harnessed as a tool during the Albigensian Crusade. The Historia Albigensis, she argued, uses emotion to draw clear lines between the pure (the orthodox Catholic) and the impure (the Cathars and their sympathisers), between those who should be fired by zeal to remove the source of infection and those who provoked moral disgust. I think she provided a very useful reminder that emotion is not necessarily irrationl, and that emotions are in part regulated and generated by social contexts.

Stephen Harrison (TCD) gave a wonderful overview of the Irish Viking Grave Project, and of recent reassessments of burials and artefacts excavated during the nineteenth century. He argued that the number and frequency of so-called “Viking burials” point to them being not ethnic burials, but rather an élite and occasional burial practice. The furnished burial rite had an exceptional importance in Dublin, and was used there as a means of marking out the city boundaries.

Terry O’Hagan (UCD) surely took the prize for the talk with the most entertaining accompanying images, and the most active presentation! He discussed the Collectanea of Tírechán, a seventh century bishop from Mayo, and how its description of St Patrick’s journeys was used to present a very specific picture of the past as a kind of ecclesiastical manipulation. Powerful female religious figures like Saints Attracta and Mathona were also incorporated into this account in order to “retrofit” them into a Patrician landscape.

Yvonne McDermott (GMIT) rounded off the day with a lively discussion of leprosy and leper houses in Galway. She offered some interesting hypothetical reconstructions of the leper house which once stood in Galway, but which was sadly torn down in the mid-seventeenth century. She did however, sadly, disabuse us of the notion that lepers’ squints (an example seen in the photo to the left in a church in Devon, England) are anything more than a romantic story. As she rightly pointed out, if you’re so afraid of lepers, why would you let them get so close to you?