As I mentioned before, my laptop did its best ex-parrot impression last weekend, so I’ve been spending the past few days getting my new computer set up the way I want it. This has given me plenty of time to reflect on the ways in which how I use a computer in my work has changed in the five years since I last bought one—the programs which I now, as a doctoral student, consider essential are quite different to those I was using as a recent graduate of a Master’s programme.

The apps/programs mentioned below are for Mac, as that’s what I use, but I think almost all of them have Windows versions or equivalents.

The first programs I installed were those which let me get back copies of all the files I’d saved to the cloud. I use a combination of Bitcasa [Referral link], Google Drive, and Dropbox [Referral Link] (the latter primarily for resources I’m sharing with others), though there are lots of good choices out there, both free and premium. The decision as to which cloud storage service is right for you probably depends on your needs, preferences, and budget. But regardless, these three services, in combination with an external hard drive backed up via OS X’s Time Machine, meant I didn’t lose anything when my old MacBook died. (I always wince when I come across graduate students who aren’t backing up their work on a consistent basis, and I have met several, because it’s not a matter of if your computer will die, it’s when.) 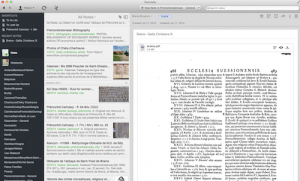 My digital brain is contained within Evernote, a program which I’ve been using for a little less than a year but one which I already cannot imagine doing without. As I started amassing ever more primary and secondary sources for my dissertation, the file folder system I was using to keep track of things became ever more unwieldy. Things were nested five or six folders deep and there was, of course, the issue of what to do if a file ‘belonged’ to two different folders—if a given charter transcription was relevant to both Topic A and Topic B. I was losing a lot of time just to sorting through and finding material.

The solution to my frustration turned out to be Evernote. I’ve transferred my sources—transcriptions, photos, pdfs of finding aids and so on—into this program. As a digital filing cabinet, it offers ‘notebooks’ (which you can see listed along the black sidebar on the left-hand side of this screenshot) which are in many ways analogous to file folders on your hard drive, allowing you to bundle together similar ‘notes’. For instance, I have a notebook for notes on Premonstratensian rules, one for the monastery of Lieu-Restauré, and so on. Evernote also, however, allows for tagging individual notes in many different ways across notebooks—so clicking on the tag ‘charter’ will let me find all the notes I have tagged ‘charter’ across all notebooks.

Evernote even has the ability to recognise printed/handwritten text within images through its own OCR process. Put an image into Evernote and that image becomes searchable within Evernote—I’ve found this very accurate with scans of maps from books or pdfs of typewritten manuscripts, but unsurprisingly medieval handwriting will make it very confused.

Evernote syncs to your browser and to mobile devices—on more than one occasion, I’ve been able to call up photos of charters to show to colleagues on the spot (truly, we’re living in the future). There are limits to how much you can upload in a month with the free version, but a month’s paid time (which gives you 1GB worth of uploads) is just $5, which even for a grad student budget is pretty affordable. 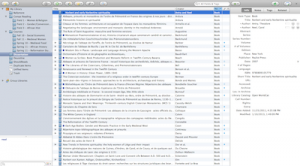 Where Evernote is my commonplace book, Zotero is my reference manager. I’ve been using Zotero since I started my doctoral programme, and I really wish I’d had it when I was working on my Master’s. (I used to keep a list of things I’d read in a .txt file! The humanity.)

Zotero is a free browser extension for Firefox, Chrome and Safari (also now available as a standalone tool) which was designed by historians for historians as a bibliography tool. It stores full references to journal articles, books, manuscripts, and a whole host of other sources commonly used by historians. Zotero can save references automatically from online databases like JSTOR or from library catalogues, including automatically saving pdfs of journal articles; it lets you create collections (as you can see in this screenshot of my library) corresponding to particular projects or courses; and it can generate citations according to hundreds of different reference styles. It does have some integration with word processors via plug-ins, so you can write in Word and it will keep track of your references for you and then automatically generate a bibliography for you.

Zotero does sync with Zotero.org so that your references are always backed up. There is an option to sync both the bibliographic references and the associated files. The one big drawback is that if you work with a lot of large pdfs (as I do), you will hit the 300MB storage limit very quickly and upgrading to their premium syncing level is expensive. I manually back up my Zotero library to Google Drive instead. There is apparently a way to automatically sync your Zotero library, complete with stored pdf files, to Dropbox, but I have to confess that the instructions are too technical for me and I’ve never tried to make it work.

Last, in my browser, I also added the bookmarklet which lets me easily add bookmarks to my Diigo account, which is a social bookmarking site. Here’s where I confess that I find Diigo’s website design to be incredibly clunky and unintuitive, and that I’m always on the look-out for an alternative, but needs must. I’m still irritated with Yahoo for what they did to delicious.com, the original version of which was simple to use, let me look up my bookmarks from any computer, and had a (now-destroyed) social network of academics, libraries and research institutions sharing their online finds with one another. I know most people probably use Twitter to find new links nowadays, but its ephemerality and lack of a solid search function make it a poor alternative for me. 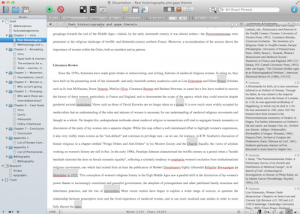 I have Word for Mac installed, but I hardly ever use it unless doing something like formatting my CV, putting together a flyer, printing out a formal letter and so on. This is because I realised that what Word does best is layout, but that layout is way down on the list of priorities for someone working on a lengthy piece of writing, academic or otherwise. Enter Scrivener. This program has made me become one of those terrible evangelist types, because I honestly can’t envision writing anything longer than a couple of pages in Word anymore.

This is because I don’t write in a linear manner, and non-linear writing is something which Word is not designed to facilitate. Word is about layout, but Scrivener is about actual composition. It lets you work in ‘chunks’—smaller individual sections which you can name, drag and drop to move them around within larger sections or your project as a whole (project layout is visible in the lefthand sidebar of the screenshot), and to which you can attach a digital ‘index’ card which lets you keep track of your intended goal for that chunk. You can add comments and footnotes (as you can see on the right of the screenshot), and you can also split the main text frame, vertically or horizontally, to compare two sections or versions of a text. This means I can, say, have the current version of a chapter in the top half of my screen, with a version (complete with track changes) sent to me by my advisor in the bottom half of the screen. I can easily work on one as I refer to another with no switching back and forth between windows.

The one downside for me is the lack of a plug-in which lets it talk easily with Zotero, but Scrivener more than makes up for this in other ways. Such as how it saves your work automatically after two seconds of inactivity, and you can also set it to automatically back up your work to a Dropbox account every time you close the program.

Scrivener is a paid app, but there is an educational discount year-round and I think it always goes on sale around November.

These are small programs which don’t necessarily form a direct part of my research process, but which I find very useful in a more general way.