This Saturday I paid a visit to a new exhibition at the Musée de l’Institut du Monde Arabe, called “Lumières de la sagesse – Écoles médiévales d’Orient et d’Occident,” which runs from now through to January 5th, 2014. Curated by Djamila Chakour, it seeks to explore the role of formal education in the medieval world (primarily the 9th through to the 15th centuries), and how it contributed to the circulation of knowledge between Western Europe, Byzantium, and the Islamic World.

The exhibition focuses primarily on manuscripts, and there are about fifty beautiful examples here, gathered not just from Parisian libraries and museum, but also from as far afield as Leiden, Aberdeen, Bologna, Copenhagen and Riyadh. The genres on display range just as widely: from medical treatises and philosophical works to Latin-Arabic dictionaries and commentaries on Euclid. Combined, they give one a real sense of how knowledge was created and transmitted as higher education became institutionalised over the course of the medieval period, and of the awareness which medieval peoples had of their cross-cultural contacts. For example, this wonderful fifteenth-century manuscript illustration from Italy (now at the Bibliothèque nationale de France), which shows the “fathers of medicine” talking to one another on a rather Escher-esque staircase: Asclepius, Hippocrates, Ibn Sina, ar-Razi, Aristotle, Galen, Macer, Albertus Magnus, Dioscorides, Yuhanna ibn Masawayh, and Serapion. 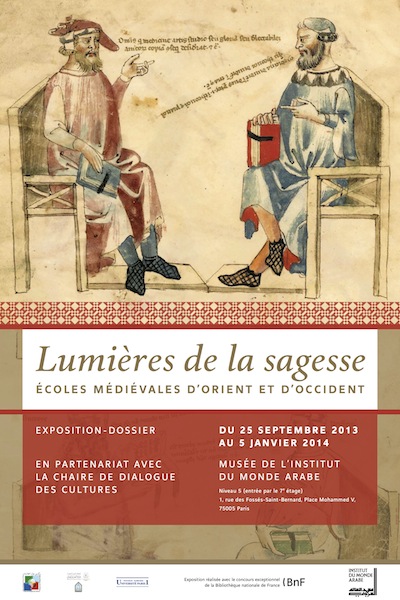 The final display case in the exhibition holds something that is sure to fascinate any medievalist: the original foundation charter of the Sorbonne, complete with its original wax seal, still attached by its silk threads. It’s surprisingly small and unassuming, looks like many other thirteenth-century charters, and is much less physically impressive than many of the larger works in the exhibition, yet is a key piece in the history of one of Europe’s most important universities.

Located as it is on a somewhat awkwardly shaped mezzanine level, the sens de la visite of the exhibition, as the French put it, isn’t always entirely clear. The explanatory material accompanying the exhibits is mostly useful, but contains some odd lacunae. The exhibition is obviously tailored to a general audience, and there’s only so much which one can fit into a couple of lines—but if, for example, one has opened a medical text to a series of sketches of mandrakes, it would seem necessary to explain them! They’re eye-catching but not necessarily something most people could identify. It was also not always immediately clear which manuscript was which—the placards were numbered but the artefacts weren’t, and there was one case where four different manuscripts were described but only three were on display. There, even the process of elimination didn’t help us identify which manuscript the third one actually was. These quibbles aside, “Lumières de la sagesse” is a highly worthwhile visit for medievalists and non-medievalists alike.